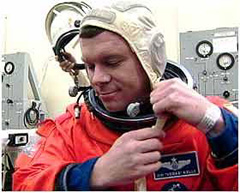 Iowa is prominently featured in the opening minutes of the new “Star Trek” movie that’s being released nationwide today.

“I’m really, really happy to see that America is back on the course to go to the moon and beyond that, to Mars, and to keep going out, so it’s something that’s been a long time coming,” Kelly says. “I’m very, very excited about the possibility of that. It’s exciting to have a new program starting up. It’s bittersweet to see the shuttle (program) end however it’s time for the shuttle to come to an end because it’s an aging vehicle that’s been around for a very long time.”

The space shuttle Columbia was the first to go into space in 1981. Project Orion is expected to become reality in about six years and may be landing Americans on the moon in 2020. Kelly says he doesn’t think he’d be a likely candidate for Orion but suggests fellow Iowan, veteran astronaut Peggy Whitson, might have a good shot at our nation’s next moon shot.

“Yeah, Peggy would be tremendously qualified for that,” Kelly says. “She did an absolutely fantastic job onboard the International Space Station on both of her flights and obviously she was the first female commander of the space station and I don’t know what her plans are but, I was the Cap-Com for a lot of her mission and she did an absolutely fabulous job up there. She’s incredibly well-qualified for when we go back to the moon.”

Whitson served two six-month missions aboard the space station in 2002 and from October of 2007 until April of 2008. Whitson, a Beaconsfield native, accumulated 377 days in space between the two missions, the most for any U.S. astronaut.

The tiny eastern Iowa town of Riverside claims to be the future birthplace of Star Trek hero James Kirk. The new film in the long-running series opens in a future-Iowa as the wanna-be space traveler gets a glimpse of a starship being built in a mammoth factory surrounded by cornfields.