You are here: Home / Military / Iowa Guardmember swears son into military via internet from Iraq 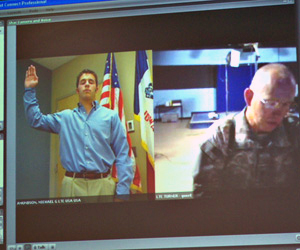 An Iowa National Guard soldier recently deployed to Iraq got to swear his son in as the newest member of the guard despite being thousands of miles away.

It was 11 p.m. in Iraq and 3 p.m. in Iowa as Lieutenant Colonel Harold Turner swore his son Brett in via webcams and an internet connection at Camp Dodge in Johnson.

Turner says it’s "very humbling, proud moment" as he says he never tried to push on his two sons into his employment choice. "It’s very much and honor to have one of my sons choose to be a soldier and to serve when by his state and nation." Turner says it means a great deal to have his son join him in the military.

He says he is proud of both Brett and his son Grant because they are both "men of integrity." Turner says he’s proud of Brett choosing the military because of the growth he will have as a soldier and personally. Brett is 22-years-old and says he respects his dad and the things he has done for his family, and decided to join the military after learning his dad would be deployed.

Brett says he plans to go to basic training and do the best he can, and then he will come back and enroll in the R.O.T.C. program at the University of Northern Iowa. Brett says he will be commissioned as an officer and then will see if this is his career path, but says he can’t see how it wouldn’t be his career. For the Lieutenant Colonel, just using the technology to take part in this ceremony was something special.

Harold Turner says his dad as an aerial photographer in B-17 bombers in World War Two and says his dad would be amazed at the technology that allowed him to swear Brett in over the internet. 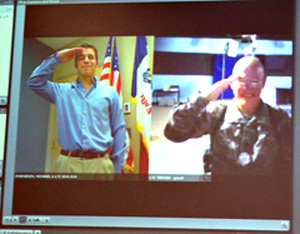 Brett’s mom Jana was on hand for the ceremony today. She says it’s very emotional for her to see her husband in Bagdad, and to know her son is also going into the military in the same year.

This is the first deployment of Turner’s career and that means they will be appart for their 30th wedding anniversary in June. Jana admists there’s is worry with him away and her son soon going off for basic training.

Jana says she worries about small things that they both probably don’t think about and there will be a lot of changes to go through. Jana Turner says this continues a long family history of military service, as her father was also a World War Two veteran. Brett Turner will leave in June for basic training and he will finish up his training about the time his father’s tour of duty in Iraq is over.

Hear the swearing in ceremony on the link below.