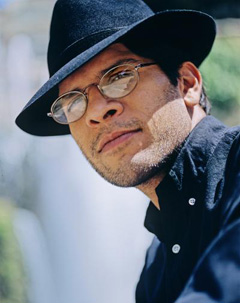 An Iowa City author who comes from a long line of Hindu priests has written a memoir detailing his fall into drugs, sex and crime and his eventual recovery.

Cheeni Rao notes that his book, "In Hanuman’s Hands," has the words "a memoir" on the cover, but says it’s much more than an autobiography.

"It’s not just a memoir and it’s not just based on my life but it interweaves a lot of family history that goes back about a thousand years," Rao says.

"It’s playing a lot with ideas of memory, ideas of the line between fiction and non-fiction. I’m using mythologies. I’m using different kinds of stories from my family’s history as well." Hanuman is the mischievous Hindu monkey god who Rao says helped to guide him from his hedonistic nightmare. In the book, Rao says he had visions of Hanuman while smoking crack in the back alleys of Chicago.

"It’s more about a combination of the immigrant experience and the drug experience while also interweaving Hindu mythology and Hinduism in a way that the Western audience can understand," Rao says. "It’s not about any one thing. It’s about everything that was part of my experience growing up."

Rao’s family first came to the U.S. from India in the 1960s and he was born in the Chicago area in the early ’70s. After submitting to many temptations and his eventual recovery, he graduated from the University of Chicago and later, the Iowa Writer’s Workshop at the University of Iowa. He says his writing style is a bit unusual.

"I’d think of something and I’d jot it down on a napkin, sometimes on the palm of my hand and then go back and write it on little scraps of paper," Rao says. "When I was at the workshop, I started writing in specific about the recovery house and all through that, as I continued to unfold the story, I started digging through these notes."

Still living in Iowa City, Rao is now founder and owner of The Iowa Book Doctors, which does one-on-one teaching, creativity coaching and ghostwriting of manuscripts. For more information on Rao, visit his website here .