You are here: Home / Outdoors / ISU studies the decline of the white-tailed jackrabbit 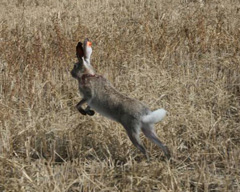 Researchers at Iowa State University are trying to determine why the white-tailed jackrabbit is declining in Iowa.

The species’ population has been dropping since the 1960s and the Department of Natural Resources has now canceled a hunting season for the animal.

Sue Fairbanks in an associate professor in the I.S.U Natural Resource Ecology and Management Department.

She says white-tailed jackrabbits are technically hares, not rabbits, and are much larger than cotton-tailed rabbits that are common in residential areas. "The ones that we have captured are eight to nine pounds," Fairbanks said. "They don’t use burrows and they are born fully-furred, with their eyes open and basically running around with their mother immediately."

Fairbanks began studying the white-tailed jackrabbit three years ago with help from the D.N.R. She says a big part of their demise has to do with Iowa’s shift in agriculture. "As the number of small grains and alfalfa has declined in the state, so has the jackrabbit population," Fairbanks said. "They like open areas with high visibility."

The open areas help the jackrabbit identify predators – which, in Iowa, tend to be coyotes. Fairbanks says she and others at I.S.U. are trying to determine if the remaining jackrabbit populations in Iowa are genetically isolated. If that’s the case, those populations would eventually die out.

"We’re doing a population genetics study where we’re getting tissue samples from road kill jackrabbits all over the state to look at the genetic simularities," Fairbanks said. Eight jackrabbits have been captured and collared on the I-S-U research farm. They’re now being tracked to study their travel patterns and habits.

Iowans that feel they have information on jackrabbit populations in the state are encouraged to contact Fairbanks. Her email is [email protected]