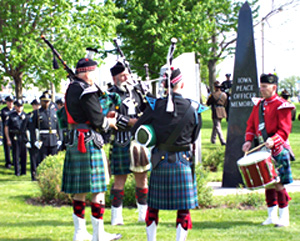 A ceremony was held on the statehouse grounds today to honor Iowa peace officers who’ve died in the line of duty.

Prayers, music and a 21-gun salute were among the actions taken to pay tribute to the 141 men and women who have their names carved in a granite memorial to fallen Iowa peace officers.

"Be with the families and friends of those remembered and honored," a chaplain said as he delivered the invocation. "Comfort and strengthen them."

Iowa Public Safety Commissioner Eugene Meyer was the master of ceremonies. "I’m pleased to report to you today that no Iowa law enforcement officer has died in the line of duty during this past year," Meyer said. "That said, far too many were injured in the line of duty. Most, not all, have returned to work."

A Cedar Rapids policeman who was severely beaten in March was just released from the hospital last week and continued to recover from his injuries.

The names of five Iowa policemen who were killed between 1880 and 1911 were read at the ceremony, as state officials work to review records and ensure names on the national list of peace officers killed in the line of duty are added to the Iowa Peace Officers Memorial in Des Moines.

Governor Culver asked the crowd to join in a moment of silence to honor the dead, as well as the living. "Men and women on the front line, those law enforcement officials across this state deserve enormous credit for the sacrifices they make every day," Culver said.

Three lawmen in uniform placed a wreath of flowers near the base of the granite monument to Iowa’s fallen peace officers, then guns were fired in a formal salute. A trio of bagpipes played "Amazing Grace" but just one of the bagpipers played the closing verse as he slowly walked away into the distance.

Listen to the entire ceremony by clicking on the audio link below.