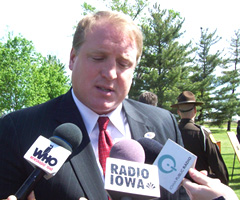 Governor Chet Culver will sign a bill into law today, setting in motion plans for the state to borrow millions to finance infrastructure projects.

"It was a major victory for the people of Iowa to get I-JOBS passed and we’re going to celebrate that today as I sign the bill," Culver told reporters this morning in Des Moines. "We’re going to create jobs. We’re going to help communities recover from the floods."

Culver is in Marshalltown over the noon-hour to hold a bill signing ceremony at the Iowa Veterans Home. The bill includes money to modernize the facility which serves as home to over 720 residents who are veterans or the spouse of a veteran.

Culver, who’s a Democrat, calls the entire "I-JOBS" package an investment in the state’s future, but Culver’s Republican critics say the price is too steep. Over $700 million in projects will be financed by "I-JOBS," but critics say when you add in the interest, the state will spend $1.7 billion in total.

"There’s always going to be disagreement," Culver told reporters. "…You rarely have a bill where there’s not some opposition. The thing I’m focusing on today is signing a very important piece of legislation that will help us work our way out of this recession, create jobs and modernize our state’s infrastructure."

Republicans dispute Culver’s job creation claims — saying a few thousand rather than tens of thousands of jobs will be created and Iowa G.O.P. leaders counter that now is not the time for the state to accumulate "massive" debt.

"What they don’t realize is that at the local level, we borrow for major projects all the time. Within their districts, the Republicans support local projects for public schools or hospitals that very often use bonds to pay for those projects," Culver said. "…We’ve not done that at the state level. This is the time to take control of our own destiny, to create jobs, to modernize our infrastructure."

Culver will appoint a new six-member board to decide which projects will get funding.

Culver plans to travel to New York in June to meet with potential buyers of the bonds the state will issue to raise the money.  Culver acknowledges his reelection in 2010 may be tied to the success or failure of the program.

"Iowans expect results from their elected officials. We’re going to make sure that we implement this program with transparency and accountability. We want input from Iowans so that we invest in the very best projects locally — whether it’s a sewer/water project, a bridge, a road, a community college (project) so there will be involvement from the general public," Culver said. "We’re going to need their help to make sure we get these projects done on time and on budget."

This afternoon at 2:30, Culver will sign another bill which allows the University of Iowa to borrow $100 million for flood recovery efforts on the Iowa City campus.  The bill signing will be staged at Hancher Auditorium, the performance hall that was heavily damaged, cannot be repaired and will be rebuilt elsewhere.