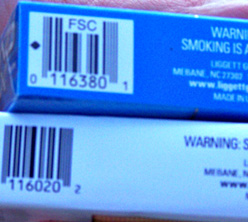 Iowa retailers were forced to start selling so-called fire-safe cigarettes in January and now Nebraska is poised to follow suit with a similar law.

The cigarettes are thicker in two separate spots so they’ll go out if left unattended.

"Here in Sioux City, we’ve had the issue of being a border city where people could still go to Nebraska or South Dakota and buy those non-fire-safe cigarettes," Hirsch says. "With Nebraska entertaining that law, that would be one opportunity where they can’t go get those and we’ll be on an equal playing field."

Hirsch says his team has tested the new cigarettes and they -do- help prevent fires. "The fire-safe cigarette went out in a matter of seconds where as the non-fire-safe cigarette sat there and smouldered for as long as we ran our experiment," Hirsch says. "They definitely will help reduce the number of fires and therefore, reduce the number of fire deaths."

"Eventually, all 50 states will have it," Hirsch says. "It just makes good sense." Last year, 48 people died in fires in Iowa, with ten of the deaths related to carelessly discarded smoking materials. Hirsch says some people are complaining about the taste of fire-safe cigarettes, but they’re made to save property — and lives. Two men were killed in Sioux City earlier this year due to a fire caused by smoldering cigars.