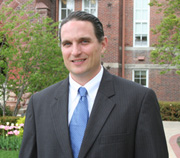 The statewide bicycle ride known as RAGBRAI isn’t usually associated with the Nine Eleven attacks, but both are prominent events in the life of Darren Harkins. Another big event comes tonight as the New York native graduates from Drake University Law School.

The unusual tale begins a decade ago when Harkins was a New York City firefighter and some his co-workers invited him to pedal his bike across Iowa during the summertime.

“I met my wife in 1999 on RAGBRAI and we married out in New York in 2003 and I visited Iowa numerous times during the course of the relationship and always loved Iowa,” Harkins says.

“When I had to retire early in 2005 due to some health problems, I thought that moving back to Iowa would be a great opportunity to start a second career and go back to law school.” He says those health problems were a direct result of the attacks on September 11th, 2001.

Harkins says, “I was told by the New York City Fire Department medical office that due to some of the debris I inhaled over the course of my service down at the World Trade Center site that I would never again be a full-duty firefighter, so they gave me the option to retire early.”

After serving for two years as a New York City policeman, Harkins switched over to the fire department and served on the F.D.N.Y. for ten years, rising to the rank of lieutenant. While some might see it as a stretch, going from being a cop to a fireman to a lawyer, Harkins says it all follows a pattern.

The 38-year-old says, “Public service has always been a huge part of my life and I think now that I’ve gone on and gotten my law degree, I’m going to center my practice on just helping normal people as best I can and hopefully do a lot more with public service.”

Harkins actually graduated from Drake Law back in December but is taking part in tonight’s commencement. He’s already passed the Iowa Bar Exam and is setting up his legal practice in Des Moines. His wife, Kaylene, is a native of Nevada, Iowa.