You are here: Home / Fires/Accidents/Disasters / George Wyth park in Waterloo back open after flood 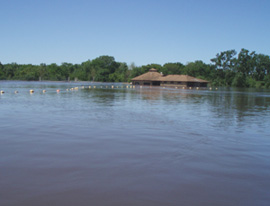 A popular state park in Waterloo is now accepting campsite and lodge reservations for the first time in nearly a year.

The campgrounds, lodge and a host of other facilities at George Wyth State Park were closed on June 4th, 2008 because of record flooding.

Park manager Lori Eberhard says the park is located in a flood zone, so high waters aren’t too unusual, but last year’s flooding buried everything under at least a-half-foot of water. "Everyone of our facilities that park users use were affected," Eberhard said. "We had facilities, such as the lodge – which has never had water in it…had six feet of water in it."

Campsites at George Wyth will reopen on Sunday, while the lodge will be available to park users again on Monday. Eberhard says the depth of the flooding is still hard to believe. "It was pretty surreal and just unbelievable. It was hard to see it in pictures because it was just hard to fathom that much water," Eberhard said. 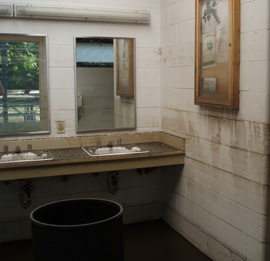 The lakes, boat ramps, playgrounds and bike trails opened after the waters receded.

Three park shelters at George Wyth are still without restroom facilities and the beach will likely remain closed through this summer.

"That was the most heavily hit facility. Water washed out around the foundation and washed out some sidewalks. Water was up to the roof of that building," Eberhard said. She’s hoping the new beach will be open by Labor Day. The flood damage at George Wyth State Park is estimated at nearly $500,000.