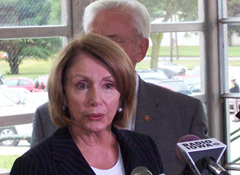 Republican Congressman Steve King is accusing House Speaker Nancy Pelosi of "undermining" the country with her recent statements about the interrogation techniques used by government operatives in the post-9/11 era.

"This is an enemy of national security that holds the gavel of the speaker of the house and now she is accusing the C.I.A., the people that have kept us safe over all these years, to be a group of liars who willfully and calculatingly lied to the United States Congress," King says. "It is outrageous and the American people need to speak to their Democrat members of congress and ask them to come up with a new speaker."

Pelosi has accused Bush Administration officials of lying to her and other top members of congress who were briefed, in private, about the interrogation techniques being used on terror suspects who were in U.S. detention. Specifically, Pelosi insists that during a briefing in September of 2002 she was never told the technique of waterboarding was used.

Congressman King, a Republican from the western Iowa town of Kiron, contends Pelosi’s story about what she knew and when she knew it has changed. "She believes that the integrity of the office of Speaker of the House of the United States can trump the truth or trump the records that are out there," King says. "It is utter arrogance to think she can roll back the truth."

Pelosi is the top Democrat in the U.S. House and King says it’s time for Pelosi’s fellow Democrats to kick her out of the speaker’s post because of her recent statements about those classified security briefings. "It lies in the hands of Democrats. As long as they will support Speaker Pelosi, she will be the speaker," King says.

"When their seats become vulnerable, if they’re afraid that they’re going to lose their seats because they vote for and defend this kind of activity that undermines our national security, at that point they’ll find themselves a new speaker." Pelosi, as speaker, is second in line of succession, behind the vice president, if the president is unable to fulfill his term.