You are here: Home / Politics / Govt / Vaudt: I will not run for governor 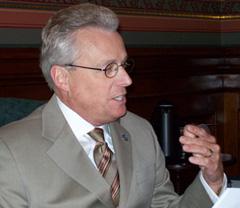 State Auditor Dave Vaudt, one of two Republicans who hold statewide office, says he will run for reelection rather than run for governor in 2010.

"Iowans of all types have asked me to consider running for governor. I’m flattered that Iowans would come forward and encourage me to run and I have seriously considered that over the last several months," Vaudt says.

"As you’re aware, I am very concerned about Iowa’s long-term finances."

According to Vaudt, his "voice" that’s warning about impending financial disaster for the State of Iowa would be muted if he were to run for governor.

"And we’re at a point where Iowa needs to reverse course. We need to turn things around and start moving in the right direction," Vaudt says, "and I truly believe this is not going to happen unless Iowans have a clear picture of what’s really happening with our finances."

Vaudt held a budget briefing for reporters this afternoon in his statehouse office. Vaudt’s general conclusion is that Governor Chet Culver and his fellow Democrats in the legislature overspent and shouldn’t have borrowed as much as they did for infrastructure projects.

"There is a very huge cost to Iowans because of our short term thinking and taking the easy road rather than the best road," Vaudt said. Vaudt told reporters deciding against a run for governor hadn’t been an easy decision for him.

"It was a very difficult decision. I’m very, truly concerned about Iowa’s future," Vaudt said. "I have a great deal of love for Iowa. It’s where I was born and raised and I think we have great opportunities here, but I’m very discouraged with the way we’re handling Iowa’s finances."

Vaudt does not plan to endorse another Republican in the 2010 gubernatorial race. Chet Culver, a Democrat, has indicated he intends to seek a second term as governor. Vaudt, a certified public accountant by trade, was reluctant to say Culver’s chances of reelection were endangered by his record on spending.

"Whenever elected officials make decisions, they need to be able to justify their decisions and that’s what they’re going to have to do with the taxpayers," Vaudt told reporters.

Iowa Ag Secretary Bill Northey, the other Republican who holds statewide office, has said he’ll decide this summer about a run for governor.  But Northey has indicated he is "leaning" toward a run for a second term as ag secretary.

Click on the audio link below to listen to Vaudt’s announcement, then to a question-and-answer session with reporters.  The longer, half-hour-long audio file includes the opening part of Vaudt’s news conference — before his campaign announcement.