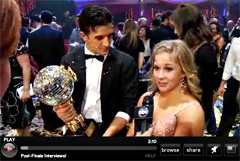 Johnson was named the "Dancing With the Stars" champion on the season finale of the hit ABC show.

The show’s host told the television audience that when the judges’ scores and votes from viewers were tabulated, less than one percent separated Johnson from her closest competitor, a Frenchman who starred in last summer’s "Sex and the City" movie.

"This has been the most amazing experience ever," Johnson said after winning the show’s trophy which is festooned with a mirrorball, similar to those seen suspended above ballroom dance floors.

Liang Chow, Johnson’s gymnastic’s coach, watched the finale with a crowd gathered in West Des Moines. Chow told a WOI TV reporter on the scene Johnson’s win was "so good for the sport of gymnastics."

During a televised interview in Hollywood immediately after the show’s conclusion, Johnson called the "Dancing With the Stars" trophy "her new gold medal."

Johnson has said she’s still deciding whether to try to compete in the 2012 Olympics. As for dancing, Johnson laughingly said she’s not sure where she’ll be able to "cha cha cha" once she returns home.

Johnson and other members of this season’s "Dancing With the Stars" competition will be guests on "Good Morning, America" on ABC Wednesday morning.