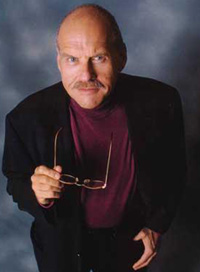 One of America’s most prolific mystery writers is visiting four cities nationwide on what may be his last book tour: New York, Los Angeles, Des Moines and Cedar Rapids.

Lawrence Block , who has published more than 60 books in his 70 years, says his latest book, "Step By Step," is his memoir, detailing his globe-trotting in pursuit of the sport of racewalking.

"When I set out to write the book, I figured it would be the chronicle of a year in the life of an aging and by no means talented racewalker," Block says.

"Once I started writing, I found myself bringing in a lot of other material. I realized I’d been, to one extent or another, involved in walking all my life."

If you’re not familiar with racewalking, it’s a long-distance foot race, and an Olympic event, but it’s different from running in that one foot must appear to be in contact with the ground at all times. Block has visited more than 100 countries and details his journeys around the planet with his wife, from viewing penguins in Antarctica to spending three months walking across Spain.

While he’s seen great success over the decades with his works of fiction, the native and current New Yorker says he’s never before made much of his private life public. Once he started though, he says the stories began to flow. Block says, "I felt a curious freedom in that I was by no means convinced anyone would want to publish it or read it so I put concerns of that right out of the way and I just wrote it entirely to please myself."

The novelist says the new book is filled with stories about his challenges and triumphs — all centered around the act of walking. He remembers holding his breath as he passed the graveyard while walking to school as a boy — and years later, hitting the 70-mile mark in a 24-hour ultra marathon.

"I don’t know what anybody learns from it," Block says. "It’s hard for me even to tell what I’ve learned from my exploits. Occasionally, on some trips, the ultimate lesson that I’ve learned is ‘Don’t go there.’" After 70 years, 60 books and numerous screenplays and short stories, Block says he may have reached a turning point with this memoir and it might be time to take a break, perhaps a permanent break, from writing.

"It’s hard to know," Block says. "It sometimes feels as though I may be done writing novels. I’m not sure. I’ve still been writing some short fiction this past year. Whether or not I’m going to do anything further in memoir, I don’t know."

He says his fans in Iowa have been very loyal and he’s eager to make another stop in the Hawkeye State on this very limited book tour. Block is to appear Thursday at 7 P.M. at the Theatre Cedar Rapids in Cedar Rapids, and Friday at 7 P.M. at Hoyt Sherman Place Theater in Des Moines.