Governor Culver has signed a bill into law which addresses some of the issues surrounding the state-ordered closure of an eastern Iowa "bunkhouse" for mentally disabled men who were working at a meatpacking plant.

"People with disabilities are, first and foremost, people who should be treated with the dignity and respect they deserve," Culver says. "While we can’t change the past, we can do all we can to ensure that situation like that of Atalissa never happen again."

This past February state officials moved 21 malnourished men who were living in an old schoolhouse in Atalissa to other facilities after investigators found the fire code violations in the home — and discovered space heaters were the only source of heat in the schoolhouse.

"If there could ever be any silver lining from this terrible experience, it is that the men from Atalissa can serve to teach us all a valuable lesson about the inherent value of every person and the need for vigilance in protecting people’s rights," Culver says.

Iowa Department of Elder Affairs director John McCalley says this new state law will require unlicensed group home like the one in Atalissa which house disabled Iowans to register with the state.

"This is a practical step forward," McCalley says. "It gives us something to build on should we need to in the future, but does not overreach in the government’s authority."

McCalley is leading a task force that’s still reviewing the Atalissa case, and he says they may have more recommendations for the 2010 legislature as they may learn more once documents from the criminal investigations on the state and federal level are made public. As a result of the bill the governor signed into law today, more group homes for disabled Iowans will likely be subject to state inspection.

"We have come a long way in our society in the types of things that individuals can do in the workplace, the services that available for individuals to live independently," McCalley says, "and what existed in Atalissa is just absolutely the wrong this for this day and age." 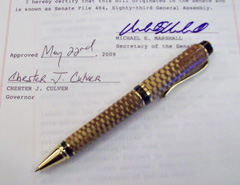 McCalley’s brother Mark, who has Down’s Syndrome, made Governor Culver a pen to use for signing the bill today.

Mark wasn’t at the bill signing ceremony, however as he was, at that time, riding the bus to his job at a Wal-Mart in Waterloo.

"It is made out of a corn cob, actually, so it’s very Iowa," McCalley said of his brother’s handiwork. The governor joked: "It’s renewable."

McCalley then handed Culver the pen: "If you would please, use it for signing at least one stroke on the bill." Culver used Mark McCalley’s corn cob pen first, then used about a dozen others to sign the individual letters of his name on the bill and another document that’s given to the secretary of state.

Then, as previous governors have done, Culver handed out the pens to those who’d come to watch him sign the bill. Culver, though, kept the corn cob pen.

Click on the audio link below listen to all of today’s bill signing ceremony.