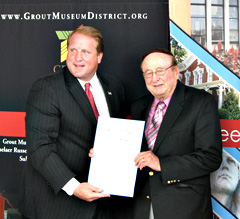 Iowa veterans and their families have a few new benefits as a result of four bills that were signed into law today.  Governor Culver signed the four bills during a ceremony at the Sullivan Brothers Iowa Veterans Museum in Waterloo.

"I’m here today to send a clear message to Iowa’s veterans and to men and women in uniform, and the message is simple," Culver said. "We thank you for your service and we will support you when you come home."

One law forbids banks and other financial institutions from foreclosing on the Iowa home of a soldier who is on active duty. Another allows out-of-state veterans and their families to enroll at Iowa, Iowa State or U.N.I. and pay instate tuition. A third bill clarifies the workplace rules for soldiers who are called to active duty and then return to their job in the private sector.

State Senator Jeff Danielson of Cedar Falls served in the Navy from 1988 to ’94 and he was on hand for today’s event. "It’s an incredibly proud day for a lot of Iowans because many of us have close, personal connections to Iowans who have served and their families," Danielson says.

While each bill may not seem important to an individual veteran or military family, Danielson says the four bills, collectively, create a multitude of benefits for active-duty soldiers and their loved ones.

"Decisions that we make and probably don’t think about ’em much — for a military family, that’s an incredibly difficult time for them when it comes to finances and keeping them together and so we think if we can reduce those burdens, we ought to, and honor the service at the same time," Danielson says.

Iowa has one of the highest rates of men and women in uniform on active duty. "We believe that not just on Memorial Days, but on all the other days of the year we ought to be doing the things that make their lives easier and honor that service," Danielson says. "So the legislation that the governor signed today reduces some of the families burdens that occur when a service member serves overseas."

Waterloo attorney Ed Gallagher, a World War II veteran, spearheaded the effort to create the Iowa Veterans Museum and he was in the facility today for the bill signing ceremony.

"It means a great deal to me to see the support that our legislature, that they’re thinking of veterans, and recognize the sacrifices that veterans made to serve their country," Gallagher says.

After signing the bills, Governor Culver named Gallagher an "Outstanding Iowan" and presented him a certificate for his efforts on behalf of the Sullivan Brothers Iowa Veterans Museum which opened last fall.