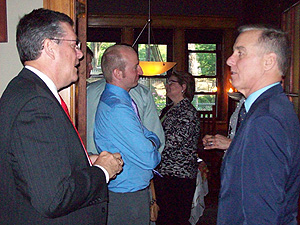 Former Vermont Governor Howard Dean says the "tide is turning" on gay marriage, partly because of the attitudes of younger Americans. Dean, a 2004 Democratic presidential candidate, was in Iowa tonight to speak at a fundraiser for "One Iowa" — a group that has lobbied for gay marriage.

"This new generation is not nearly as divisive or confrontational as my generation and they also all know somebody who is gay because somebody has publicly said so to them and once you know somebody who is gay or lesbian, you can’t say the things that you used to say about them," Dean says. "I remember growing up, we used to say things about gay people; we didn’t know anybody who was gay — we didn’t think we knew anybody who was gay. Once somebody says, ‘I’m gay and I wish you wouldn’t do that,’ you don’t talk like that anymore because they’re a human being."

Dean says he was "shocked" when he learned of the state Supreme Court ruling that legalized gay marriage in Iowa.

"I was just so amazed ’cause I knew so much about Iowa because I spent so much time here," Dean says. "I have to say that once the decision came down that Iowans, being fair-minded and practical, would ultimately accept it, but I also knew that the right wing is very strong here and that there would be, you know, a big to-do about it."

Opponents of gay marriage pressed legislators to set the wheels in motion to allow a statewide vote on a constitutional amendment which would ban gay marriage. But the top two Democrats in the statehouse — Senate Majority Leader Mike Gronstal of Council Bluffs and House Speaker Pat Murphy of Dubuque — would not allow it. Dean saluted the two at tonight’s event.

"I’m the first governor to ever sign a civil unions bill which nowadays is no big deal but then it was a very big and I just believe in fundamental fairness and social justice," Dean said in an interview. "And I’ve always thought Gronstal and Murphy were terrific people and I know what it takes to stand up for a decision like this and it takes a lot of courage. You always want people in public life who have courage."

Republicans believe they will be able to win some races in Iowa in 2010 over the gay marriage issue, but Dean, who just finished a four-year term as chairman of the Democratic National Committee, offers the opposing view.

"This has just become a non-issue in states where there’s a lot of neighborliness," Dean said. "Because even if people don’t think, for religious reasons, that gay people ought to be able to get married, they’re also respectful of their neighbors who may have a gay person in their family."

Dean, who practiced medicine before entering politics, spoke at a health care forum in Des Moines late this afternoon before attending tonight’s fundraiser.