You are here: Home / Education / State says 53 schools will get grants for pre-school 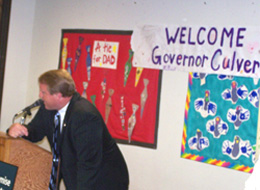 Governor Chet Culver and the director of the Department of Education visited a school in downtown Des Moines Thursday to announce that 53 more schools will get state funding for pre-school programs for the next school year.

Culver says environments that "support and stimulate and nurture" our children play a critical role in developing the full capacity of every child to learn. He says the benefits of quality early learning environments are "long-term and far-reaching."

Culver says nearly 10,000 kids have been able to go to preschool in the first two years of this program. Culver says they estimate next year almost 13,000 4-year-olds at 172 school districts statewide will be able to attend preschool statewide.

Education Department director Judy Jeffrey says the tight budget will keep them from reaching all the kids they’d hoped for. Jeffrey says they were scheduled to have 90% of the 4-year-olds in preschool in four years by spending $15-million each year. But she says the legislature cut funding back to $11.5 million, so they will not hit their goal this year.

Jeffrey says while they won’t hit their goal, they are glad to be able to keep the program going. She says they are pleased they are getting new dollars this year considering the economic conditions. Jeffrey says the announcement of the new grants is key for districts to get things going.

She says they don’t hire staff until they know they have the grant funds — and now they will go into high gear to hire the staff and let the parents know the program will be offered. Jeffrey says there are some schools offered pre-school already, but charged parents, and now they will be funded by the state. Jeffrey says the investment now will pay dividends down the road.

Jeffrey says pre-school decreases the dropout rate, there are less people who land in prison or on social services, more students who go on to post-secondary education, and less teenage pregnancies. "I mean the research is very clear about a quality early start, and that’s why we are so adamant about a qualified teacher in every single classroom," Jeffrey says. Jeffrey says the amount each district will receive depends on their teacher costs.

Here are the 53 districts announced Thursday as recipients of the state grants for pre-school programs: