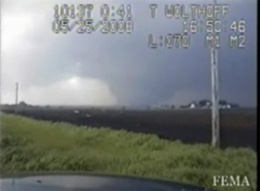 Sixteen new on-line videos document how far Iowa communities have come in the rebuilding process after the destruction by last year’s floods and tornadoes.

"What we were trying to accomplish with the videos was to show a broad range of the state in terms of what happened with the tornado, and more importantly, the flooding last year," Mancino says. "These videos primarily cover state and federal funding assistance to different communities and to different businesses that were impacted." Some of the videos have never been seen publicly before, including dramatic footage of the tornado approaching New Hartford.

The New York-based Mancino says it’s been rewarding to come back to Iowa this spring to shoot the follow-up stories as so much progress has been made in the past year.

"I was thoroughly impressed with the amount of reconstruction and rebuilding that they’ve done in Parkersburg," Mancino says. "A year later, it’s hard to imagine that this town was struck by an EF5 tornado." One eight-minute video is entitled "Turning Tragedy into Triumph" and focuses on Parkersburg — both the extreme structural damage and the rapid recovery. He says slideshows also detail the "before and after" side of the story.

He says a Parkersburg man who lost a garage to the tornado got his building permit and had it rebuild within less than a week. Mancino says it helps to show the resilience of the people in Parkersburg who want to rebuild smartly, safely and as soon as possible. Many towns across Iowa are featured in the videos, including Waverly, Cedar Rapids, Waterloo, Iowa City, Independence, Oakville, Tama and Muscatine.

Mancino says Iowans — and everyone else — will gain inspiration from seeing the videos as the devastating events were met with a "we will overcome" attitude. He says Iowans are "can-do folks, hardworking folks" who just want to get their communities back. See the videos here .