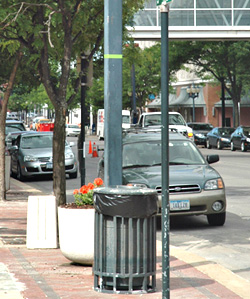 Lime green tape is being wrapped around utility poles along many main streets in Cedar Rapids, marking the height of the water from last year’s record flooding.

Hundreds of Cedar Rapids’ city blocks were inundated when the levee broke June 12th forcing the evacuation of thousands of residents. Hundreds and homes and businesses were damaged as the river flooded out a mile wide in some areas. Many homes have been torn down. Some have been rebuilt and dozens remain empty.

"Twelve months ago, our city went through the worst natural disaster that we’ve ever had in our history and it’s been a tough 12 months," Willis says. "We’ve made some progress but we still have a long ways to go. We know we’re going to gather a lot of visitors, a lot of national attention next week with the actual anniversary of the flood, and we want to make sure the visitors to our community realize what we’ve been through."

She says the green tape provides a perspective — it lets people take stock in how bad things were just a year ago and to reflect on the progress that’s being made. "We have many years of flood recovery ahead of us and the people who have suffered the most, the flood survivors, deserve the respect we’re trying to show them after what they’ve been through," Willis says.

"This is not only a reminder for visitors, it’s also a reminder to the people who live here, to honor what has happened in our city, to mark that history and then to think about the future."

The tape is being placed in several areas, including: Czech Village, the Time Check neighborhood, the New Bohemia Neighborhood, throughout the downtown area, and on five bridges. She says with the widespread destruction also brought something of a silver lining, as Cedar Rapids is being given a chance to rebuild itself, better than before.