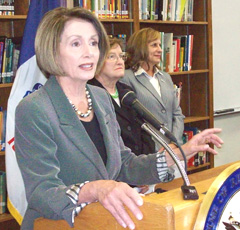 House Speaker Nancy Pelosi says Republicans who’ve been railing against her for saying she was misled by the Bush Administration about water boarding are merely frustrated by Democratic successes.

"Our success on all that we are doing in education, in energy and we will have a health care plan on the floor of the house by the end of July and what we are doing to reduce the deficit and create jobs — our success in the congress is driving the Republicans to distraction," Pelosi says. "And this is what that’s all about — a distraction from the creation of jobs, which is our responsibility, education of our children, preservation of our planet."

Pelosi was in Iowa this morning attend a private fundraiser. She spoke with reporters this afternoon after a public discussion about education, an event held in a junior high school in Des Moines.

Pelosi, who has been in congress for 22 years, became the first women to serve as house speaker when she was elected to the role in 2007. Pelosi suggested Republican criticism will not prompt Democrats to change course.

"It is the arena that I have chosen to be in," Pelosi told reporters. "I understand what that is, but it will not take us off our course of action."

Last week, Congressman Bruce Braley of Waterloo said Pelosi is a lightening rod for attacks from the Republican Party because it’s easier to attack her than to attack President Obama because of his public approval ratings. Pelosi’s approval ratings are just south of former Vice President Dick Cheney and Pelosi doesn’t dismiss the idea she is a sort of lightening rod for Republican strikes.

"That’s the role of the speaker. You want to be the leader? You have to be there to take whatever comes at you," Pelosi said. "And so, as speaker of the house, I knew when I assumed this responsibility that those who did not agree with the direction that we want to take the country in, the change that the American people asked for, would try to distract the public from the focus that we have."