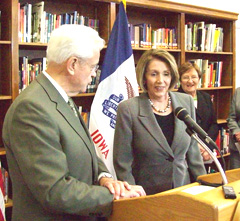 Congressman Leonard Boswell, a former member of the House Intelligence Committee, is defending House Speaker Nancy Pelosi who has come under fire for saying she was "misled" by the Bush Administration about the interrogation techniques used on terror suspects.

Boswell, a Democrat from Des Moines, was on the House Intelligence Committee in September 2002.

That’s when Pelosi says she was never told the technique of water boarding was used. Boswell suggests at that time he and other Democrats on the committee were upset about water boarding and a letter of complaint was sent to the Bush Administration.

"A letter went forth to inquire about that. It was representing all of us and someday, when things are unclassified, maybe you’ll be around to see that," Boswell told a group of Iowa reporters this weekend.

Boswell, who is 75 years old, spent 20 years in the Army. He served two tours of duty in Vietnam, flying helicopters which were used in both assault and rescue missions. Boswell is among those who classify water boarding as torture.

"I absolutely do not support this type of (interrogation). I haven’t and I know the speaker does not either," Boswell said Saturday. "And that’s just the way it is."

Boswell stood by Pelosi’s side this weekend as the house speaker made a public appearance in Des Moines. Boswell served on the House Intelligence Committee until this past January, when he rotated off the panel.

"I was there when Ms. Pelosi was the ranking member and we took the oath that we were in a classified setting," Boswell said. "And in my experience, I certainly lived up to it and I’ll verify that she’s lived up to it."

Iowa Republican Party chairman Matt Strawn issued a written statement in response to Boswell’s comments.  "It is disappointing that Congressman Boswell is falling in partisan line behind the Speaker and rejecting calls for the briefings in question to be declassified," Strawn said.