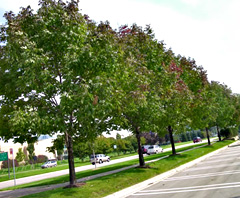 Iowa communities could face millions of dollars in tree removal expenses thanks to a little green beetle that has inched up to Iowa.

Many Iowa cities planted ash trees to replace elms when Dutch Elm Disease killed the trees in the 1950s. Now, the emerald ash borer is threatening to destroy those stands of mature ash trees.

Iowa Department of Natural Resources forester Tivon Feely recently stood along a street in Ankeny that’s lined with ash trees. “If you look, these are all the same age. They probably came from the same nursery. They’re the same height, the same diameter,” Feely says. “We’re talking probably 15 to 18 inches in diameter — just becoming a nice shade tree — and they’re going to lose them all if emerald ash borer showed up here.”

The emerald ash borer was first detected in Michigan in 2002. Ken Rauscher of the Michigan Department of Agriculture is the agency’s director of pesticide and plant pest management.

“Here’s what the situation looks like today seven years later: in the lower one-third of the southeastern portion of Michigan — basically if you draw a line from Saginaw to Jackson, Michigan, including the Lansing area — everything kind of southeast of that line is either dead or dying,” he says.

Rauscher says the loss of those ash trees caused significant erosion along Michigan’s streams and rivers, but the impact to the state’s urban and suburban areas is even greater.

Thomas Wilson, the public works director for the Detroit suburb of Westland, Michigan, says it cost his community more than $2 million to get rid of the three-thousand ash trees that died there on city property.

“Our budgets couldn’t withstand it,” he says. “I didn’t have the right equipment…I didn’t have a lot of things that were proper to take down those size trees.”

Wilson couldn’t pay his workers overtime. As a result, some dead ash trees there stood for more than a year before they were cut down.

State officials estimate is would cost Council Bluffs $2 million to take down the ash trees that stand in city parks and other publicly-owned areas. For Davenport, the tab would be more $1.6 million. In Des Moines, the DNR estimates ash tree removal from public areas would cost $1.2 million.

That’s just what it would cost cities to take down ash trees that stand on public property. In some areas of Michigan, dead ash trees are still standing because homeowners and businesses can’t afford to have them removed.

Last week state officials announced the emerald ash borer had been found in an ash tree in eastern Iowa’s Clayton County. That tree, which had been stressed on purpose so it would be a welcome host to the pest, is located about 60 miles from an emerald ash borer infestation in Wisconsin.

State officials estimate there are more than 6.5 million ash trees in Clayton County, home to the cities of Elkader, Marquette and Strawberry Point.