You are here: Home / Crime / Courts / Grassley meets Sotomayor after she falls, breaks bone in ankle 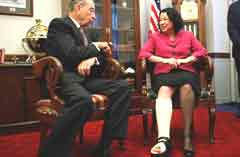 Earlier this afternoon, Senator Chuck Grassley met privately with the president’s nominee for the U.S. Supreme Court and Grassley says he found Sonia Sotomayor to be both friendly and reserved.

"I guess maybe I was led by the press to believe maybe she had an aggressive style," Grassley said during an interview with Radio Iowa. "She didn’t demonstrate that to me."

Sotomayor kept her appointment with Grassley despite falling in a New York airport, on her way to Washington, and breaking a bone in her ankle.

"She didn’t seem like she was in any pain, talking to me," Grassley said. "She was very comfortable."

"She told me the cast is on and there’s a lot less pain or no pain compared to when she did it in LaGuardia in New York, and then got on the plane with a broken ankle," Grassley said. "She said it was a pretty clean break and she’d be on crutched for just for six weeks. Normally a break in the ankle is really bad."

Grassley spoke by cell phone with Radio Iowa early this evening as he walked from his senate office to cast a vote on the senate floor, and the Radio Iowa reporter asked Grassley if he’s glad Sotomayor fell before rather than during her visit to his senate office.

"Yeah, because I probably would have been sued," Grassley said, with a laugh.

Grassley, a Republican, is a member of the Senate Judiciary Committee, the panel that will hold confirmation hearings on Sotomayor.