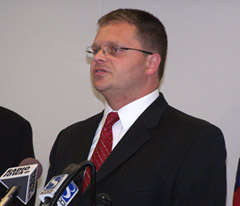 Federal officials Wednesday announced the results of a six-year investigation that shut down an internet prescription drug operation that illegally sold over millions of pills.

Matt Dummermuth, U.S. Attorney for the northern district of Iowa, says the investigation got started with an eastern Iowa drugstore.

Dummermuth says in March of 2003 the drugstore in Dubuque sold 90 diet pills to a California woman based on an internet prescription from a doctor in Mississippi. He says six years and 30-million pills later, the Dubuque pharmacist and the doctor who filled the prescription were convicted along with 24 others.

Dummermuth says the Union Family Pharmacy unlawfully dispensed over one-point-one million prescription pain, diet, and psychiatric pills over a six-month period for the internet companies, Pharmacom International Corporation ("Pharmacom") and Medical Web Services ("MWS"). Dummermuth says both companies recruited physicians to review drug orders placed by customers, and they would then write the patients a prescription. 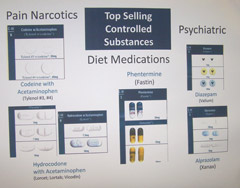 Dummermuth says the patients were getting those drugs via the internet because they couldn’t get a valid prescription from a doctor, as they were abusing the pain killers, diet medications or psychiatric drugs.

"It was a way to get around having to show a valid or legitimate medical purpose for the use of the drugs," Dummermuth says.

Fifty-five-year-old Douglas Bouchey was the Dubuque pharmacist convicted in the case. Bouchey has since moved to Michigan and the pharmacy is under new ownership. Dummermuth says there were no other Iowa connections to the illegal sales. He says they investigated very thoroughly and no Iowa doctor was ever charged and no Iowa doctor to their knowledge was ever involved in the Pharmacon or Medical Web Services schemes.

Dummermuth says the executed search warrants in 35 separate locations at the same time and were able to find 150 semis full of files in the case. Those files led them to recover a record $7 million from the two companies and $4 million is going to agencies in Iowa that helped with the investigation. Dummermuth says all the money will be poured into future law enforcement efforts.

Dummermuth says this case should help cut the illegal internet sales in the U.S. dramatically. He says the word is out nationally that law enforcement is onto the schemes and some of the companies are moving out of the country to try and continue operating.

The 26 people convicted in the case each faced various prison sentences, with the three owners of Pharmacon sentenced to 32, 35 and 36 months in prison. The sentencing has not yet been set for the owners of Medical Web Services. The former Dubuque pharmacist, Bouchey, was sentenced to six months probation and had to forfeit just over $29,000.