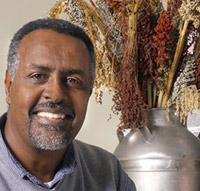 A native of Ethiopia, who’s now a professor at Purdue University, will be awarded with the 2009 World Food Prize.

Gebisa Ejeta has developed sorghum hybrids that have enhanced the food supply of hundreds of millions of people in sub-Saharan Africa.

Kenneth Quinn is the president of the World Food Prize Foundation, which is based in Des Moines. He says Ejeta’s first break through came in 1983. "He developed the first hybrid sorghum and the yields from that increased ten-fold," Quinn said.

"In addition, he has produced sorghum that is drought tolerant." In the 1990s, Ejeta’s research allowed African sorghum farmers to control the deadly parasitic weed Striga.

"As a result, the yields have increased ten-fold and there are as many as 500-million people growing sorghum and using it as their main cereal for food in Africa," Quinn said. The 59-year-old Ejeta first arrived in the U.S. in 1973 after a difficult childhood, growing up in west-central Ethiopia.

Quinn says Ejeta was raised in a one-room thatched hut with a mud floor in remote village. "He only got to go school through his mother’s encouragement and it was 20 kilometers away. He had to spend the week at school," Quinn said. The selection of Ejeta as the 2009 World Food Prize Laureate was announced this morning at the State Department in Washington, D.C.

Ejeta will be presented with the $250,000 World Food Prize on October 15th at the Iowa State Capitol.