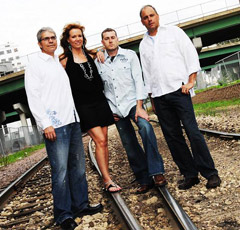 A classic rock band made up of co-workers at an eastern Iowa spice and tea company will compete in a national "battle of the bands" next weekend in Los Angeles.

The band Aeroroot takes its name from the herb, arrowroot, one of the things produced by Frontier Natural Products Co-op in the town of Norway.

Drummer Steve Krusie says the band was formed five years ago just to play at the company’s holiday party. Krusie says, "We just got a lot of positive feedback from our colleagues at Frontier and they said, ‘You guys have gotta’ keep playing because you’re too good not to.’"

Aeroroot  is still playing and is among 16 bands from across the country made up of co-workers to compete in the semi-finals of the Fortune Magazine Battle of the Corporate Bands.

The four finalists will have a playoff at Cleveland, Ohio’s Rock and Roll Hall of Fame this fall. So what’s a corporate band? Krusie explains. "At least 50-percent of the band members have to be working at the same company and the lead singer has to be from that company," he says.

"They’re looking for people who just have a passion and love for playing music who are not professionals." Aeroroot will perform next Saturday (June 20th) at The Key Club on Sunset Boulevard in West Hollywood.

The venue earned its notoriety as the home of future rock stars, including The Doors, Tina Turner and Van Halen. The Iowa band will play a 20-minute set in L.A. featuring six songs from bands like The Who, The Monkees and The Wonders.

Aeroroot is also slated to play this Saturday at the Floodstock Festival in Cedar Rapids, an outdoor benefit concert to help in the recovery from last year’s devastating floods. For more information, visit the band’s website here .