You are here: Home / News / Iowa native returning to state for Indy Corn 250 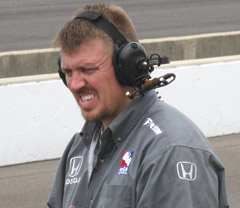 A Muscatine, Iowa native who serves as a mechanic for an Indy Racing League team is looking forward to a stop in his home state for the June 21st Iowa Corn Indy 250 in Newton.

Brett Snyder is in Richmond, Virginia this week working with the H.V.M. racing team preparing their car for the race.

Snyder says he’s excited to get back to Iowa and see some of his family and friends. Snyder says driver E.J. Viso and rest of the team are hoping to find some luck in his home-state for this race. He says they are a smaller team with a good group of guys and a good driver, but says they haven’t had a whole lot of luck this year.

Snyder says they’ve had a few things break and got caught up in some accidents, so they haven’t seen many good results yet this year, but they are hoping to turn that around in Iowa. Snyder says his busiest time as a mechanic happens before race day.

He says the main goal is to "have a decent car when you come off the truck" as he says it’s hard to catch up if your car is not ready to go at the start. While the Indy cars are nothing like the regular cars that everyone drives — Snyder says the troubles in the domestic auto industry do have an impact on racing.

"I think you see it in all aspects of racing, because the way the economy is, you know we depend on sponsors to be able to do this and if you don’t have a sponsorship money to do it, you are not going to be able to do it, especially the smaller teams, it has a big effect on us," Snyder says.

Snyder lives in Kennard, Indiana with his wife and three daughters when not on the road with the racing team.