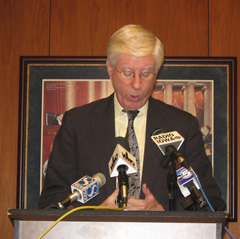 Tom Miller has twice introduced legislation that makes it a felony to sexually solicit a minor on-line.

Miller warned a legislative committee Thursday that on-line solicitation is on the rise, but the penalty is so lax that law enforcement agencies hesitate to invest the manpower to catch the predators.

"Among the leaders in this have been Black Hawk County, the sheriff’s office and other enforcement agencies. They were getting about six charges every three months," Miller said. "But when it could only be a misdemeanor, in terms of their resources, they’ve cut back. So we really need that change."

Currently, when an undercover decoy poses as a minor on-line, the solicitor can only be charged with attempted enticement. That’s an aggravated misdemeanor which can result in jail time but no prison term. Miller says it should be a felony. "I think in most states it is a felony and it really needs to be," Miller said.

"It’s a serious attempt to try and harm a young person." The state public defender’s office and American Civil Liberties Union of Iowa have objected to increasing the penalty, arguing it could lead to entrapment.