You are here: Home / Recreation / Entertainment / Rescued dog has role in play 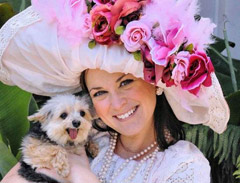 One of the stars of a play being performed at the Iowa Governor’s Mansion this weekend has no lines to recite and is only being paid in doggie treats.

"Emmy" was recently adopted through the Animal Rescue League of Iowa and had a hard life until recently, according to Mark Gruber of the Repertory Theater of Iowa .

"Emmy was a rescued dog off the streets of Des Moines that was a ten-year-old terrier mix," Gruber says. "This dog was truly near death as it had been struck by something, maybe a car. It had a broken jaw when it was discovered and had an infection and through that infection, it lost some of its teeth."

While Emmy is a male dog, he’s dressed for the stage with a pink bow to play the role of the female dog, Pinkie-Pankie-Poo. Ignoring those indignities, Gruber says the pint-sized canine is perfect in the part. "This dog is a tiny toy terrier that is the right temperament and has the loveliest little cute face," Gruber says, laughing.

"Her tongue has to constantly work to manipulate the saliva off her broken jaw. It’s somewhat pathetic but it’s very cute." While this dog’s no Lassie or Benji, Gruber says Emmy’s been terrific to work with in the spotlight. "From near death, this dog is now starring on our stage," he says.

"It’s quite a remarkable turn of events for this little pooch." Emmy is co-starring with Gruber and others in the two-week run of "A Pyg’s Eye," a comedy set in the Victorian era. It was co-written by Gruber and is based on the writings of George Bernard Shaw.

The play was commissioned by the Terrace Hill Foundation for its Victorian Voices series and will be performed tonight and Saturday outside the governor’s carriage house on the lawn.