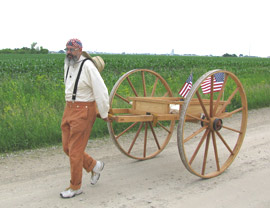 A Salt Lake City, Utah man is slowly making his way across Iowa on foot. Lynn Cleland, a Morman, is walking back to his home and pulling a 217-pound cart.

"This is a replica of an 1856 handcart that’s exactly as Brigham Young specified with no metal on it except for the hoops on the wheels and the hubs," said Cleland, who goes by the nickname Doc.

He passed through Grinnell Monday after starting his journey last Tuesday in Iowa City. The 59-year-old Cleland says he’s making the trip on the old Mormon Trail in honor of his grandmother, Sarah Goode Marshall, who was one of almost 3,000 hardcart pioneers that traveled on foot from Iowa City to Salt Lake City between 1856 and 1860. He’s hoping the adventure will end up on TV.

"We’re trying to film this for a pilot for The History Channel," Cleland said. "I’m also trying to walk with (people from) different religions – every religion across America. I’ve only walked with a Methodist so far." 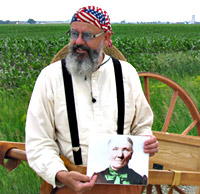 Cleland is trying to recreate the conditions his ancestors faced on the 1,400 mile trip by eating what they ate, sleeping in a tent from that period and wearing their style of clothes.

Cleland says he learned a great deal about Mormonism in his preparations for the trip. "As I was getting closer to doing this, I was in a lot of pain just climbing hills in Utah (training for the trip)," Cleland said.

"What I discovered was their faith was greater than their pain. Because they woke every morning and went, ‘this is tough.’ I get blisters all over my feet and it had to be 10 times as hard as what I’m doing." Cleland is following gravel roads and Highway 6 across Iowa, as he tries to stay close to the original Mormon Trail.

Find out more about his trip here .