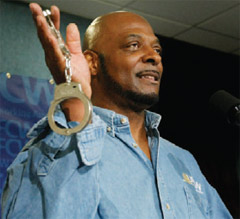 A national commission released a report today that says there was a "systematic abuse of worker rights" during the federal immigration raids that included the 2006 raid at the Swift meatpacking plant in Marshalltown and the 2008 raid Agriprocessors in Postville.

The reports says the raids cost millions of dollars to capture a few illegals, and harmed worker relations in the process.

Mary Bauer of the Southern Poverty Law Center was on the commission and spoke on a conference call about the report.

Bauer says the report does an amazing job of laying out the costs of the raids, particularly the human costs.  "The destruction of families, devastated communities, terrorized children, including it must be noted, many U.S. citizens," Bauer says. Bauer says the report details how the Immigration and Customs Enforcement Agency (ICE) used strong-arm tactics to abuse the workers at the plants.

Bauer says it shows a law enforcement agency with "really the most profound disrespect for the law and our nation’s constitution." She says reading the report she was particularly struck by "how profoundly unconstitutional most of these raids were in the way that they were carried out and practiced." Bauer says the tactics were used throughout the Bush administration, but some of them still continue under the Obama administration.

Bauer says the answer to the situation is change with "fair and comprehensive immigration reform." She says the report lays out some very specific suggestions for reform. The president of the United Food and Commercial Workers International Union, Joseph Hansen, chaired the commission that wrote the report, and the commission also included U.S. Ag Secretary and former Iowa Governor Tom Vilsack.

Waterloo resident Michael Graves commuted to work at the Marshalltown plant and was working on the day of the raid there. Graves was on the conference call about the report and talked about how an ICE agent stopped him and two other men at the plant. The agent took them to the lockerroom to get their identification.

Graves says the agent refused to let him go to the bathroom even after finding out he was a legal worker, and then held him for several hours. He says they were not fed anything until it was all over and that took about eight hours.

Graves says it baffled him to be treated that way when the agents were there at the plant looking for a handful of people. The report calls for a change in policy to target employers who "abuse the immigration system and exploit an undocumented workforce."

It says enforcement should be coordinated with the Department of Labor to protect workers and preserve employee rights before any possible immigration detention or processing and workers and their families should be treated with respect so they will be more inclined to assist in the prosecution of criminal employers, and to build trust between law enforcement and the community.

(photo from the commission report)