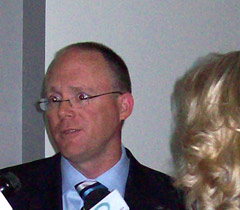 A second northwest Iowa Republican has taken steps toward formally launching a campaign for governor. State Representative Christopher Rants of Sioux City filed the paperwork today to form an "exploratory committee" — a sort of precursor to a formal campaign committee.

Rants, who is 41 years old, has been a legislator for 17 years. For about a decade, he was a leader of his fellow Republicans in the House. But after G.O.P. losses last November, House Republicans chose another leader. Rants says that experience changed him and changed his approach to politics.

"I’ve had to eat a little humble pie over the last six months and that’s probably been a good thing for me," Rants says. "It’s given me an opportunity to step back and be a little bit more thoughtful…I’ve learned a lot about myself. I am probably better as a person…I know I’m better off today than I was eight, nine months ago."

Rants admits in the past his political style was "too aggressive" and he was "too quick to have an answer."

This morning, Rants used Twitter, Facebook and his blog to announce he was taking this next step in the campaign.

"I think that Republicans have to embrace the new media. You know, we’ve got a fairly sophisticated electorate in this state," Rants says. "And it’s been fun and interesting as I’ve traveled around Iowa I Twitter and put on Facebook where I’m going today and where I’ve just been and I’ve been getting a great response to that, so I’m going to keep doing that."

Rants says he’s put 11,000 miles on his car in May and June, traveling around the state to gauge the concerns of Iowans.

If he were to win the Republican primary next June, Rants would face-off against Governor Chet Culver, a Democrat, in the fall. Rants intends to make flood recovery an issue partly because Culver refused to call a special legislative session last fall to deal with flood-related issues.

"I don’t know that you can call having 300 Iowans living in (FEMA) trailers today a successful response to the flood," Rants says.

But the main beefs Rants intends to pressure are related to money — the debt the state racked up at Culver’s request to finance infrastructure projects and the financial plight of Iowans who don’t have a job.

"I care a great deal about this state and I want to make sure that my kids have the same opportunities that I had," Rants says. "And right now, I don’t think they’re getting those opportunities."

Rants says the reason he started thinking about running for governor because Governor Culver came out in favor of ending a tax break which allows Iowans to claim a tax deduction for the taxes they pay to the federal government.

"That decision on his part I think was one of the defining decisions of his tenure as governor," Rants says. According to Rants, if the change Culver backs were to happen, many Iowans would see their taxes go up. Culver has rejected that, and said he supports a middle class tax cut.

Rants is the guest on this evening’s Iowa Press program on Iowa Public Television. Rants spoke with a handful of reporters this morning, after the show’s taping, and Rants sounded like a candidate.

"This campaign is going to be running on Diet Coke and Casey’s pizza and ethanol the whole way," Rants said.