You are here: Home / Fires/Accidents/Disasters / Storms with high winds ripped across eastern Iowa 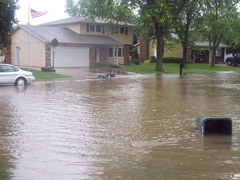 The strongest part of the storm passed through northern Linn County into southern Delaware County and then moved into Dubuque County.

Mike Ryan with Delaware County Emergency Management says there were several tree limbs down and buildings that lost shingles. He says there were areas with more severe damage and most likely had winds in the 70 to 90 miles an hour range, and there’s the possibility it was a small tornado.

Dave Klein from the Ryan Co-op had just gotten to work when the storm hit. Klein says two of their big bins had wind damage and he talked with area producers that also have wind damage. Damage was reported in Delhi, where a tree was blown down on a house, windows blown out at a house and boats sunk at Lake Delhi.

Homes in Earlville also reported windows blown in by the strong winds and roof damage. Numerous outbuildings were damaged south of Dyersville, with Dyersville receiving about 1.3 inches of rain in one hour’s time.

Outbuildings were reported down in Troy Mills. The Walker area also had a lot of damage – a 100-year old water pumping wind mill was blown over, a corn bin and dryer were pushed off its foundation and the back section of a house was reportedly torn off.

Numerous trees and power lines were down across southern Delaware County. Many areas were also without power for several hours Friday morning.

It was the second day eastern Iowa has been hit by storms. Thunderstorms dropped rain on Davenport Thursday and caused some street flooding.