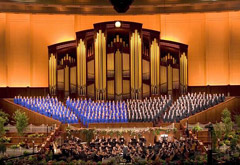 A multi-million album-selling choir that’s performed in 28 countries around the globe and at five presidential inaugurations will be in Des Moines tonight, its only stop in Iowa this year.

One member of the Mormon Tabernacle Choir is a former Iowan, Nora Hess, who says she’s living out a lifelong dream singing first soprano in the Grammy-winning assembly.

"I’ve always been a musician, since I was a little girl," Hess says. "I played the piano and as I grew up I began accompanying choirs and singing with choirs and after college I wanted to continue that so I joined the Ames Choral Society as their accompanist and accompanied them for six years." 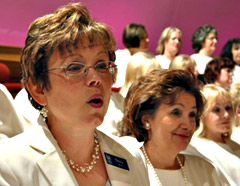 Hess lived in Ames during the 1980s while her husband, Brett, attended grad school at Iowa State University. The Hess family now lives in Utah. She says the list of songs the choir will perform tonight is widely varied to appeal to a broad audience.

They start out with hymns of praise, followed by a set of choral master works, on to folk songs from the world and American folk hymns, show tunes and Negro spirituals. The choir has 315 singers in its current touring formation along with a 60-member orchestra. Originating in the mid-19th century, it’s among the oldest and largest choirs in the world.

The 48-year-old Hess has been in the historic Mormon Tabernacle Choir for six years now and doesn’t intend to quit anytime soon.

"We’re allowed to remain with the choir for 20 years or until we turn 60 and I plan on spending all that time," Hess says. "It’s the highlight of my musical career and I certainly don’t want to change it at all."

The choir is performing tonight only at the Wells Fargo Arena in Des Moines.