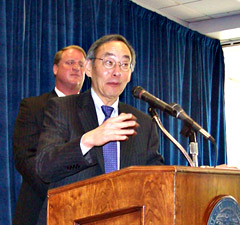 Energy Secretary Steven Chu’s agency is now considering whether to upgrade the standard blend of ethanol from a 10% blend to E15 — 15% ethanol.

"I don’t want to prejudge what they’re going to find, but if the existing automobile fleet can handle 15 percent, I would say let’s make that a target and go to 15 percent," Chu says.

Chu, who won the Nobel Prize for Physics in 1997, says ethanol helps America be less dependent upon foreign oil sources.

Chu, however, does not plan to use Energy Department rules to try to force auto companies to make ethanol-friendly cars and trucks. Chu prefers that automakers act voluntarily, or that congress pass a law on the subject.

"In virtually anything, once government steps in the natural tendency is to resist government intervention, but we’ll see about whether the current fleet can take 15 percent or 13 percent ethanol," Chu says.

Chu was in Des Moines this morning to announce that Iowa is getting $16 million from the federal economic stimulus package to support energy efficiency projects in government, nonprofit agencies and the private sector. Chu joked about his trip to the First-In-The-Nation Caucus state.

"Before I really start, I’d like to preempt a beginning question that you might ask me: I’m in Iowa but I’m not here because I’m thinking of running for the presidency of the United States," Chu said. The audience of politicians and business leaders laughed. "I’m actually here because Iowa is one of the leaders in renewable energy."

Chu answered questions from reporters and told the crowd American farmers have the capacity to provide about half of the fuel needed to propel American vehicles if scientists figure out how to convert an entire plant, not just kernels of corn, into ethanol.

Listen to Chu’s remarks by clicking on the audio link below.