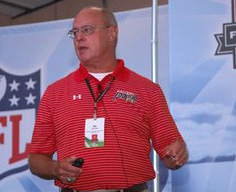 Aplington-Parkersburg’s football coach was shot early this morning in the school’s weight-training room and died shortly afterwards at a Waterloo hospital.

Ed Thomas had coached 34 seasons at Aplington-Parkersburg.  His teams won state championships in 1993 and 2001. Four of his players are on NFL rosters today and, in 2003, the NFL honored Thomas as the high school coach of the year.

Butler County Auditor Holly Fookena says about 50 students were present when the shooting happened, but none of the students were injured.

"It was a senseless act in our community this morning," Aplington-Parkersburg superintendent Jon Thompson said during an interview with KOEL Radio. "…No kids were hurt whatsoever.  We’re thankful for that. T hey did witness this, so we have counselors on the site."

The shooting happened at about eight o’clock this morning and Thomas was shot at "point-blank range." Traffic on Highway 20 was halted to provide a landing zone for the air ambulance that ferried Thomas to the hospital in Waterloo.

Authorities say the shooter has been taken into custody and is in the Butler County Jail.

"A lot of people know coach Thomas for his success as a football coach, but the people here locally know him as a person, as a dad and as a grandfather," the school’s superintendent said this morning after the shooting, but before news came of Thomas’ death. "That’s where our thoughts are right now, with coach Thomas."

The Aplington-Parkersburg High School was flattened by the May 25, 2008 tornado which struck the northwest Iowa town.  The revival of the football field and team training facilities served as a boost to the community.

(Additional reporting from Matt Kelley & Darwin Danielson in the Radio Iowa newsroom and from Elwin Huffman of KOEL Radio in Oelwein.)