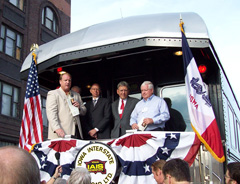 Governor Chet Culver is riding the rails today, a trip from Des Moines to Council Bluffs that’s intended to highlight his call for expansion of passenger rail service.

"Our goal, obviously, is to get a…high speed rail from Chicago to Des Moines and that appears to be going very well," Culver says. State officials met recently in Washington, D.C. with the CEO of Amtrak and Culver plans to hold a "summit" with the governor of Illinois in "the next month or so." Culver says it "really helps" that President Obama is from Illinois.

"He’s going to make sure Iowa, I think, is in the mix, too," Culver says. "…The president mentioned the fact that he wants this Chicago to Des Moines link to happen when he was here in Newton not long ago."

"This is the time," he says. "There should be funding available if we all work together to get this accomplished."

There’s no firm estimate yet, though, of the total cost of the project.

"It would be a significant capital investment for the road bed, for the equipment," Kulik says. "And a study would need to be completed to determine exactly how many dollars that would take."

According to Kulik, getting Iowans to park their cars and take a train will help reduce pollution.

"This Amtrak service would also be very important for the business community as it will assist in providing jobs and economic development," he says.

Culver and an entourage of train enthusiasts and reporters boarded the Iowa Interstate Railroad’s "Hawkeye" coaches this morning. The group will travel through 13 communities on their way to Council Bluffs, with stops in Earlham, Menlo and Atlantic. Culver’s two young children are also along for the train ride.