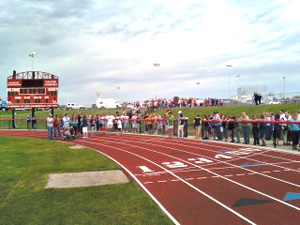 Denver Broncos center Casey Wiegmann was one of the nearly 2,500 people who attended Wednesday’s candlelight vigil for Ed Thomas.

Wiegmann is one of four players currently on an N.F.L. roster who played for Thomas at Aplington-Parkersburg High School.

Wiegman was asked what Thomas would say about the gathering on the football field to honor him. "First of all, he wouldn’t like us standing on his field right now," Weigman said with a laugh, "he would be, just get on with your life..take care of you families, definitely go to church and be Christ-like and a man of faith."

Wiegman says it "blows you away the type of man that he was." Weigman says it was hard to sit through the vigil in Thomas’ memory.

He says sitting in the stands and listening to the clergy was tough and he says every time he saw pictures of Thomas tears came to his eyes. Weigman says everyone will get through this.

Weigman says it’s hard to describe the impact that Thomas had on the school and the community. "It’s amazing what the impact this guy had on people’s lives. Every football coach could say the same thing, but there was just something special about this guy, that he went over and above what anybody could think of doing," Weigman says.

He says Thomas tried to make the lives of others better and says there’s not enough time to express all the things Thomas did for them. Weigman says he’s been in contact with some of the other N.F.L. players who went to Aplington-Parkersburg, and says they are going to try and make it to Thomas’ funeral Monday.