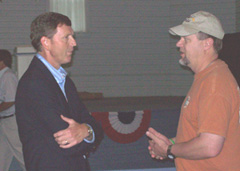 Vander Plaats has promised to issue an executive order which would effectively ban same-sex marriage in Iowa until a constitutional amendment banning gay marriage could be placed on a statewide ballot.

"People in this primary cycle are going to ask every candidate: ‘Are you willing to issue the executive order?’" Vander Plaats predicts.

Critics say the governor of Iowa doesn’t have authority to set aside a ruling from the Iowa Supreme Court — and none of the three other potential Republican candidates for governor who appeared at a weekend forum promised to issue an executive order on gay marriage like Vander Plaats has.

"It’s not because I disagree with the decision — and of course I do disagree with the decision. It’s about the separation of powers — the executive role, the legislative role and the judicial role. There needs to be that healthy tension. And when Culver said, ‘I’ll do everything in my power to make sure Iowa’s (a state where there is) one-man, one-woman (marriage),’ then he came out and he said, ‘Even though I believe in one-man, one-woman (marriage), I’m unwilling to change it,’…so I want this debate," Vander Plaats says. "I want this debate with a government teacher."

Vander Plaats is suggesting he’s better educated than Culver, too.

"I hold more degrees than he does and I have a license to evaluate him as a teacher and I plan on doing that in the 2010 general election," Vander Plaats said Saturday during an appearance in Sac City.

Both Culver and Vander Plaats earned their master’s degrees from Drake University.