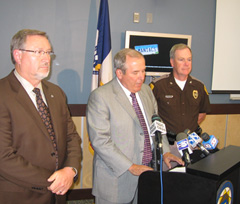 A recent survey found 93% of the motorists on Iowa road were buckled up. "But, seven-percent of the people don’t wear their seatbelts in Iowa and they account for one-half of Iowa’s traffic deaths," Meyer said.

The 30-second TV spot, titled "Maniacs," features young men performing bizarre and dangerous stunts, like jumping a minibike off a ramp into child size swimming pool. At the end, the men hop in a pickup truck and all buckle their seatbelts.

A message reads, "even for maniacs, some risks aren’t worth taking." Meyer says the goal of the campaign is to save lives. In the past two-and-a-half years, over 1,000 people have died in motor vehicle crashes in Iowa.

"More tragic is that 400 of those 1,000 people were unbelted, not wearing seatbelts at the time of the accidents," Meyer said.

A large percentage of those people not wearing a seatbelt are men between the ages of 16 and 34, the demographic targeted in the P.S.A. campaign.