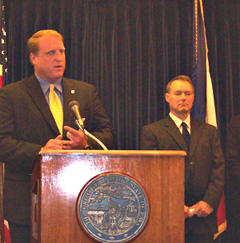 Governor Chet Culver says he is "very confident" the state budget is balanced and there’s no need to call legislators back to Des Moines to adjust spending.

Culver, a Democrat, is also accusing rival Republicans of trying to "scare" Iowans about the status of the state budget.

"In a very partisan way, the Republicans running for governor are misleading people," Culver says. "…So I think it’s very important to make sure that we hold those people accountable that are misleading Iowans. It’s just not fair. It’s not appropriate and there’s no need for alarm."

The last day of the state’s 12-month spending plan for fiscal 2009 was this past Tuesday, June 30th. Some Republicans have suggested state spending was too high and state tax receipts fell so low that the budget actually dipped into red ink.  Culver rejects that.

"It’s important for anyone in elective office, especially those running for governor, to be responsible, to not try to scare people," Culver says.  "And you know I think Iowans, in part because of this political rhetoric, they’re not sure, you know, what the situation and I think unfortunately that’s part of the partisan intent and, you know, I think it’s important that we deal with the facts."

"I was with the team that went to the rating agencies on Wall Street to ask them, ‘How are we doing?  Will you rate us?  Tell us what you think of the State of Iowa,’" Fizgerald said. "And we got the ‘gold star’ rating."

Fitzgerald said he was "proud to stand" with Culver and declare that the state is on sound fiscal footing.

"There’s been, I think, a misconception that’s been floating around out here in the press in the past couple of days about our budget, like, ‘Oh my gosh, we’ve got a crisis.’  We don’t," Fitzgerald said.  "The 2009 budget that just ended…that budget is balanced and we have almost $600 million in reserves."

As for the state spending year that started on Wedneday, July 1, Culver told reporters it was too soon to say what may have to be done to keep that in the black.

"It is very possible that I’ll have to do additional cuts and we’re going to take that step as quickly as we know the facts," Culver said.

Senate Republican Leader Paul McKinley of Chariton issued a statement after Culver’s news conference, saying the govenor was still "in denial about the fiscal condition of the state."

An hour before Culver’s news conference started, House Republican Leader Kraig Paulsen of Hiawatha issued a statement, saying Culver had "spent too much, cut too little" and racked up "a generation’s worth of debt."

Click on the audio link below to listen to Culver’s news conference.