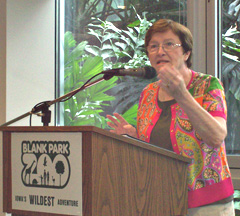 Lieutenant Governor Patty Judge is hitting the road for a three-month-long, 67-city tour of the state designed to encourage Iowans to take a “stay-cation” this year.

“Unfortunately, there are many people in the state today that just do not have the resources to take the trip to the Grand Canyon or the trip to Disneyworld…that they might have done in a different year,” Judge says. “…I have a perfect solution for them and that is this summer, just travel Iowa.”

Judge visited the Blank Park Zoo in Des Moines on Wednesday to kick-off her “Travel Iowa” tour and she got to feed the giraffes. Her itinerary will take Judge to sites and festivals around the state that she’s visited before and to some she’s never seen, like the West Bend Grotto.

“Different times we’ve driven in that area, I’ve thought, ‘Gee, I should stop and see that,’ and I’ve never have been able to do that, so I’m looking forward to that,” Judge says. “…The other thing, of course, that I’ve been promoting is getting a ltitle more physically active and so I hope to have an opportunity to walk some of these trails. I think the idea of canoeing down that river is just incredibly fun. I’m really looking forward to that.”

On Friday, July 24, Judge is scheduled to go paddling on the Iowa River. Judge, who is 65 years old, has lost about 45 pounds in the past two years.

Judge, who used to farm with her husband near Albia, says she took a lot of Iowa vacations with their three children because they couldn’t venture far from their cow-calf operation.

“We put up hay all summer and didn’t have a lot of going-away time, so maybe we were the original inventors of staying in Iowa, I don’t know,” Judge says. “But a lot of it involved putting horses in trailer and taking kids to opportunities for fun shows and so forth, things that that we did outside and as I look back on it, I think, ‘Wow, that took some courage,”…but we had a great time.”

Judge plans to keep a travel diary of her 67 stops and her staff will post it online .

“I’m not real good at all of this Facebooking, Twittering and all of these things,” Judge says. “But the staff assures me that if I can type it, they can make it work on the blog.”