You are here: Home / Agriculture / Time will tell if ISU parsley plant is a record 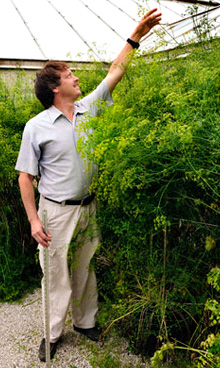 Some restaurants put parsley on dinner plates as a garnish, but a parsley plant at Iowa State University might look more at home on King Kong’s plate.

Ames is home to a storehouse for seeds, run by Iowa State and the USDA.  David Brenner is a plant germplasm curator, basicially a librarian for seeds instead of books.

While we’re used to seeing green parsley sprigs of perhaps two inches in length, the parsley plant Brenner grew is a contender for the Guinness Book of World Records.

"The existing record is six feet and our plant is seven-feet nine-inches," he explains. Brenner’s already been in contact with the Guinness people and is waiting for them to verify the ISU parsley plant is the world’s tallest. He says he didn’t set out to claim the title.

"We were just growing the plants to get fresh seed stocks for our storage," Brenner says, "and just in the course of ordinary activities, I realized we had a contender." He’s responsible for maintaining parsley and other seeds from all over the world in the "seed bank."

When the seed inventory of any certain variety gets low, Brenner and his staff grow new plants, characterize their traits, harvest the seeds and file them away in the cold storage facility.

They’re then sent to researchers around the world. Brenner says the seeds for the record-breaking parsley plant were first collected from Hungary in 1983. Even though it resembles a large bushy weed, he says it’s a perfect example of parsley. "It also had big tubers," Brenner says. "The roots are almost four inches across and in Europe, the roots of parsley are another food crop, almost like a potato, so it has a double-barreled purpose." See a picture of the gargantuan parsley at "radioiowa.com."

Brenner currently holds the world’s record for the largest amaranth, which he grew in 2004. Amaranth is an herb, also known as pigweed.