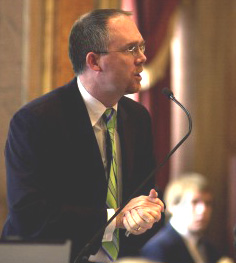 A likely Republican candidate says if he’s elected governor in 2010, property tax relief would be one of his top priorities.

State Representative Christopher Rants says border communities like his hometown of Sioux City are losing out because property taxes for businesses in Iowa are out of whack.

Rants promises to create a new state fund to finance property tax relief."We know that an economic recovery is coming at some point in time…The question is what we will do when we have that economic recovery? Will we take those additional dollars that come in and plow it into growing government again?," Rants asks.

"…I would suggest to you that the next governor ought to plan for that day now and ought to set up a property tax reduction account so that new dollars that come into that state government, rather than being squabbled over at the time about how you want to spend that money on this program or for that employee, that those dollars first go into reducing property taxes in Iowa."

Rants says, if elected, he’d set a goal of making Iowa one of the top 10 places to start a business and to meet that goal, commercial property taxes would have to be reduced.

Governor Chet Culver, a Democrat, intends to seek reelection in 2010 and Rants accuses Culver of failing to focus on economic development since he took office in January of 2007.

"We have to have a governor that every day gets up and thinks about: ‘How do I sell Iowa?’" Rants says. "’How do we help that small business get larger? How do we make Iowa a more enticing place for businesses to come and grow?’"

Rants was speaker of the Iowa House for four years. Republicans lost control of the House in the 2006 elections and in 2008, Republicans in the House elected another leader to replace Rants. Rants describes that as a turning point for him personally — a time for eating a little "humble pie" — and one of the reasons he’s now preparing to run for governor in 2010.