You are here: Home / Business / Another Republican contemplating run for governor 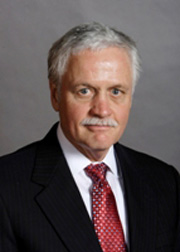 Another Republican has come forward to say he’s considering a run for governor in 2010. Senator Paul McKinley of Chariton has filed the paperwork to form an "exploratory committee" which lets him begin raising money for a campaign.

Senate Republicans elected McKinley to be their leader after the 2008 election and now McKinley says he’s "aggressively" exploring the idea of running for governor.

"During my travels as senate leader around the state — visiting with groups, activists, business groups, donors — I’ve been actively encouraged to run for governor," McKinley says. "And now I’m going to start and my vision."

McKinley, who is 61 years old, bought a business in Corydon in 1981 and expanded the product line, tripling the size of the firm which employed "several hundred" according to McKinley.

"I’ve written an awfully lot of paychecks, especially during that Farm Crisis era, in that recession era when no one else was hiring," McKinley says. "And I think our government faces many of those same problems that I faced back in my business back then and we can bring those principles of accountability, a top-to-bottom review and reform that’s needed so we can have a place our kids and grandkids can learn, live and raise their families."

McKinley sold his business in the early 1990s. Then, nearly nine years ago, McKinley won a seat in the state senate.

"My vision is we must prepare our state for the global economy and give Iowans back their government," McKinley says, "and I believe my background is best suited to make the necessary changes."

McKinley describes himself as an "issue-oriented" politician who likes to solve problems. During an interview with Radio Iowa this morning, McKinley shied away from directly criticizing Democratic Governor Chet Culver.

"What I’m offering is positive solutions to Iowans, the issues we face in the state and that’s controlling spending We must stop raising barriers to job creation and lower barriers," McKinley said. "…We have to rely upon the ingenuity and hard-work and the ethics and values and self-reliance of Iowans and their native common sense."

McKinley has a website .  You can read more about McKinley and his interview with Radio Iowa on The Blog .