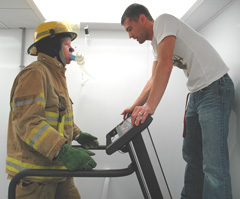 Researchers at Iowa State University are working to improve the protective gear worn by firefighters.

Professor Young-A Lee says all of the gear combined can weigh more than 50 pounds, so the goal is to maintain the proper protection while improving a firefighter’s comfort and range of motion.

"They are looking for more light fabric and light material to compensate," Lee said. Kinesiology professor Rick Sharp is part of the ISU research team. He was one of the designers of Speedo’s L-Z-R Racer swimsuit, which was worn by most of the top swimmers at last summer’s Beijing Olympics, including Michael Phelps.

"My role will really be to evaluate to what extent the gear (firefighters) currently use holds them back, weighs them down, increases their energy expenditure and reduces their endurance," Sharp said. The researchers are collecting data with help from local firefighters, who are scanned with a 3-D body scanner while using cardio machines in a thermal stress chamber.

Eric Deters, a firefighter in Ames, is hoping the experiments will lead to better fitting gear and ultimately help make his job easier.

"I would like (the gear) to be less bulky, maybe with a little bit less weight, but we still want the protection from the heat as well," Deters said.

"Maybe if it can actually release some of the heat, instead of keep all of our body heat in, that would be pretty good too." Iowa State is one of eight universities participating in the research.