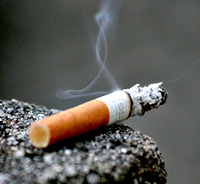 Mike Lipsman at the Department of Revenue says cigarette sales dropped by double digits in the months after the federal tax hike, pushing cigarette taxes down for the year by about 6%.

He admits that several events last year could have pushed cigarette sales down. “We had the smoking ban that went into July 1st last year, then January 1st you had the new requirement for firesafe cigarettes, then on April 1 we had the federal tax increase,” Lipsman said. “Through December, we had a slight increase in tax receipts.”

Lipsman says that slight increase shows the ban on smoking in public places did not affect cigarette sales. He believes the 62-cent hike in the federal tax is what really pushed sales down, here and across the country. “When we did our state increase, people could go to Missouri to get cigarettes. Well, unless you’re going to go to another country, it’s really hard to avoid a federal tax increase,” Lipsman said.

The 6% dip in cigarette tax collections amounts to a hit on the state treasury of about $14-million. State health officials say the federal tax hike led to a threefold rise in the number of Iowans seeking help to quit smoking.