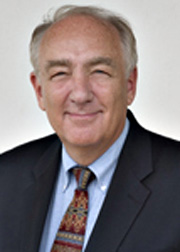 A former state legislator and congressional candidate from northeast Iowa is destined to be an ambassdor in the U.S. State Department.

Stephen Rapp of Waterloo served at the U.S. Attorney for the Northern District of Iowa during the Clinton Administration.

President Obama has nominated Rapp to serve as the U.S. State Department’s Ambassador at Large for War Crimes Issues.

Since 2001, Rapp has prosecuted international figures accused of war crimes, first in Rwanda. In 2007, Rapp became the lead prosecutor of former Liberian President Charles Taylor and others charged with committing war crimes during the civil war in Sierra Leone.

Rapp, who graduated from Harvard and then got a law degree from Drake, was a state legislator in the 1970s and again in the 1980s.

Rapp ran for congress twice, in 1974 and 1976. He lost both times to former Congressman Chuck Grassley. Grassley is now one of Iowa’s U.S. Senators. Rapp must be confirmed by the U.S. Senate in order to become an ambassador.

The White House issued a brief biography of Rapp.  Read it here .