You are here: Home / Military / Iowa comedian leaving to entertain troops in Iraq 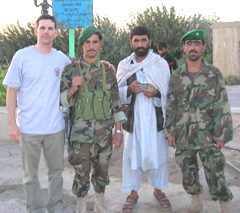 An eastern Iowa man is leaving for Iraq today, but Nathan Timmel isn’t a soldier.

He’s a comedian. Timmel will spend 10 days with several other stand-up comics performing for the troops.

The North Libery resident made a similar trip five years ago. He also visited Afghanistan.

“The decision to go back is probably one of the easier decisions I’ve ever had to make in my life,” Timmel said. “I’ve been trying to go back for years.” But, Timmel said he was waiting for the right talent agency to book the tour. It’ll be a grueling trip involving several shows a day, but Timmel says it’s his way of saying “thanks” to the men and women in uniform.

“If I can go over there and use whatever skills I have, do the job that I do and meet them in the area where they work, it’s the least I can do,” Timmel said. “It’s something I can do to distract them from their daily routine.”

The Wisconsin native said one of the highlights of the 2004 trip was a soldier that told him after a show that she had temporarily forgotten she was in a war-torn country. Timmel says that’s the reason he wanted to go back.

“It has nothing to do with right-wing, left-wing, being for the war or against the war…people signed up for the military and whether or not you support (the war), they’re still our countrymen,” Timmel said. Aside from the trip to Iraq, this is a big year for Timmel. He’ll be getting married later this summer and turns 40 in November.