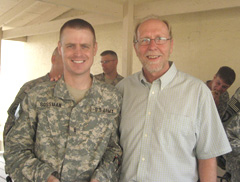 Congressman Dave Loebsack has just returned from a trip to Afghanistan where he meet with Iowa troops as well as top U.S. military leaders in the region.

Loebsack, a Democrat from Mount Vernon, was first elected to congress in 2006, partially on a tide of voter angst about the war in Iraq. Now, some Democrats have begun calling for a date of withdrawal from Afghanistan. Loebsack, meanwhile, says both he and Obama were clear with voters during the 2008 campaign about the need for a refocused effort in Afghanistan.

"We are all concerned about making sure we do not get bogged down in Afghanistan as so many great powers have in the past," Loebsack says. "Since I’ve been a member of congress, it’s been a great concern of mine. I’m also, obviously, doing all I can to hold the Obama Administration as accountable as I did the Bush Administration."

Loebsack’s Afghanistan trip comes just a few weeks before important elections in Afghanistan. Loebsack met with Afghanistan President Hamid Karzi. Loebsack also had dinner with four of the leading candidates who are running against him in the August 20th voting. Loebsack isn’t choosing sides in the election. 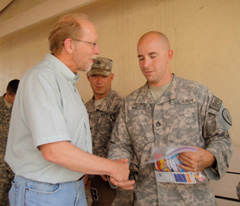 "It’s not my position to get into the middle of that," Loebsack says. "…To me and I think to those of us who are making policy here at the national level, what we need is a transparent process in Afghanistan, one that’s accountable, and whatever the process is, we have to make sure that it’s legitimate and that whoever the next president is is considered legitimate. This is a critical election. There’s no doubt about it."

Loebsack says the role of the U.S. is to provide security so Afghanistan’s citizens can vote freely next month.

Loebsack, a member of the House Armed Services Committee, led a bipartisan delegation of Midwestern House members who traveled to Afghanistan on July 27th and returned on July 3rd. Loebsack, therefore, was in Afghanistan when the recent offensive against the Taliban began.

"It began in the south and in the east to some extent. We were not on the ground, obviously, when that was happening although we were in a host province in the eastern part of the country when the assault began and we had to divert our travels in the Blackhawk (helicopter). We had to go a little further north than we thought we were going to have to, to go to Kabul," Loebsack says. "But we were not in any imminent danger."

Loebsack visited with some Iowa National Guard soldiers who’re in Afghanistan and delivered care packages from charitable groups in Cedar Rapids. The Marine Corps League had members of the Cedar Rapids Kernels baseball team sign baseballs which Loebsack gave to the Iowa soldiers, too.